Some games, selling for hard-earned money, surprised me when I saw them the first time. Examples are Avernum 6, Adventures of Fatman or Slay. Some have acceptable graphics while others make you wonder how they can charge 20$ for their MS-Paint experiments. Aside from their graphics these games don’t provide much or any innovation in their genre. They look old and play old. So how can these games sell?

Players expect indies to come up with new ideas, mechanics or twists in their games. AAA titles have to stun with their realistic graphics, physics or exciting cutscenes. So genres from yesterday seem to have no right to live, have they?

The good news is: people are creatures of habit. They like exciting new stuff but also want a supply of familiar games. This explains why old-school genres are still in use. When we consider this why should we come up with any innovation when there are enough customers for established concepts? To explain this we have to take a look at the genre life cycle: 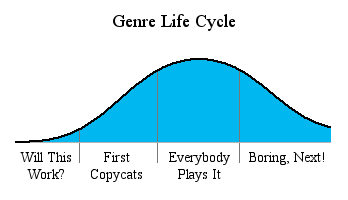 The birth of a genre can be a quick rise like Resident Evil brought the survival horror genre to the masses over night. Or it may veg out for many years until a famous title like Street Fighter II sets off an avalanche. It was Sega’s Heavyweight Champ which introduced the one-on-one fighting genre back in 1976. Quite a while from 1976 to 1992.

After gamers bought the first successful instance of a “new” genre in bucketfuls it gets more and more attention. Publishers and developers jump on the bandwagon and start an arms race of innovation in the genre. A few months later every gamer knows what it is all about. Limits of the genre become obvious and innovation starts to decline. After a flood of similar games players start to get bored by the genre. Sales curves drop. A few years later the gold rush is over and the genre forsaken.

Where do indies fit into this process? First there is this steep curve of innovation where more and more competitors enter the battlefield. No place for indies here. When everybody knows the genre AAA publishers/studios dominate the market. Again, not good for indies. After sucking all life out the big ones drop the genre and go over to more lucrative game types. Players won’t spend any dime after the gold rush. No chance indie, go home!

The truth is that indies can work as genre scavengers. After the big companies took the lion’s share small studios can take the rest. There will not be as much money involved as during the high times but enough to be worth the effort. The long tail of the life cycle does not drop to zero. It rather fades out over a long time:

So, how can we use this insight? The great thing is that you can take any gone genre and “revive” it. This is a list of dead beef I could imagine to pick up:

If you are fed up with the ongoing call for innovation and/or eye-candy graphics you may consider reviving an old genre. The wheel is already invented. You just have to spin it.